The science behind Europe’s biggest party

Saturday night saw the 65th edition of one of the world’s most watched non-sporting events – The Eurovision Song Contest. After being cancelled for the first time in its history in 2020, Eurovision returned with a bang this year, with 8 million people watching from the UK alone.

We at GISMO are big fans of the contest and wanted to delve a little deeper into the science involved in the organisation of Europe’s biggest party.

Eurovision makes people happier
A 2018 study by academics at Imperial College London found that participating in the Eurovision Song Contest may be linked to an increase in a country’s life satisfaction.

The study, published in BMC Public Health, found that people were 4% more likely to be satisfied with their life for every increase of ten places on the final score board. The results also found that doing badly in the contest was still associated with a greater increase in life satisfaction compared to not taking part at all.

The team, who were surprised to find the result, say the research chimes with previous studies that show success in big events, such as sporting fixtures, can boost a nation’s health and well-being.

The author’s stated ‘our findings suggest that, if there is an underlying causal link between [Eurovision] performance and life satisfaction, in the unlikely event that the UK performs well in the [Eurovision Song Contest], life satisfaction in the country would significantly improve.’[1] 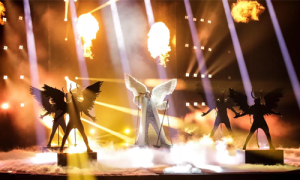 Pyrotechnics
If Eurovision is known for one thing, it’s pyrotechnics. Many acts this year, including the United Kingdom, took advantage of a fiery display to excite the audience.

Pyrotechnics rely upon self-contained and self-sustained exothermic chemical reactions to make heat, light, gas, smoke and/or sound. The ‘exothermic process’ describes a process or reaction that releases energy from a system to its surroundings, usually in the form of heat and light.

After an exothermic reaction, more energy is released to the surroundings than was absorbed to initiate and maintain the reaction. Burning candles is a simple example of this – the sum of calories produced by combustion exceeds the number of calories absorbed initially in lighting the flame and in the flame maintaining itself.[2]

LED screens
Eurovision wouldn’t be Eurovision without its extravagant staging – helped by an array of LED display screens.

LED displays are flat panels that use light-emitting diodes as pixels for a video display, using only three colours (red, blue, green). Their brightness allows them to be used outdoors where they are visible in the sun and they can offer higher contrast ratios than a projector and are thus an alternative to traditional projection screens, and they can be used for large, uninterrupted video walls.

But how do only three colours create the array of colours we see in the contest? The human eye has receptor cells called cones which detect light, and there are three different types of cone cell in the retina. These detect red, green and blue light. The colours we see depend on the different amounts of red, green and blue light which fall on the cone cells. For example, we see yellow when both red and green cones are activated. By combining the three basic colours in different proportions, the screen can produce any of several million different colours.[3]

COVID-19 testing
During the contest, all delegates were tested for COVID-19 very 48 hours using rapid antigen tests to ensure the safety of everybody involved.

Antigen tests detect the virus’s genetic material in a similar way to laboratory methods but instead using smaller devices which are easy to transport or to set up outside of a specialist laboratory. These tests detect proteins on the surface of the virus from a swab taking a sample from the nose or throat.[6]

‘Open Up’ with GISMO
This year’s Eurovision theme was ‘Open Up’ – and as life in the UK is slowly doing just that, GISMO can help you to open up your business and help you to make the most out of your current techniques, help you to develop prototypes and new designs, and make your products and processes more greener and cost effective. The UK may have received nil points this year, but GISMO will help Cheshire and Warrington businesses put the UK back on the map and ensure your business is at the top of the scoreboard.

The UK needs to put its singing material to the test after last weekend. Do the same for your business with a materials MoT from GISMO – get in touch to find out more.

GISMO is part-funded by the European Regional Development Fund.

[2] ‘Why Combustions Are Always Exothermic, Yielding About 418 kJ per Mole of O2’. K. Schmidt-Rohr, Journal of Chemical Education, 2015

[4] Eurovision by numbers: What does it take to put on our show? Eurovision.tv, 2019

GISMO is part funded by the European Regional Development Fund.

Lancaster University is a proud member of: